The terminal is adjacent to the railway siding where a loading and unloading of the liquid/solid cargoes for distant consumers can be conveniently arranged by extending the pipeline from the terminal. 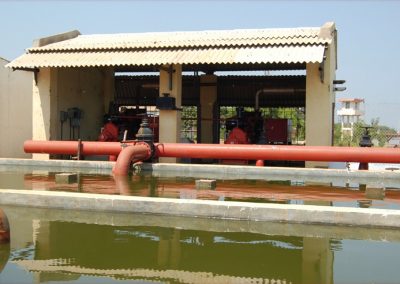 This is a bulk liquid storage tanks terminal, specially designed for import / export and storage of high viscous liquids like molasses and hot liquid bitumen and edible oils. There are 13 storage tanks of total 36,078 KL capacity. These tanks are designed as per Indian standard specifications and are resting on extra strong RCC double raft foundation suitable for storage of high density liquids. The operations were started in 1997 and so far a total of 1.5 million MT of imports and exports of molasses, edible oils, and other liquid cargoes have been handled. Another special feature of this tanks terminal is availability of 6,000 KL capacity for storage and handling of hot cargoes fully equipped with internal heating and insulation and thermic fluid heaters specially for bitumen.

All the tanks are connected with Kakinada Deep Water Port jetties with 350 mm dia piggable pipeline over a distance of 3.5 KM.

The company was the first and foremost to bring a vessel to Kakinada Deep Water Port in the year 1996, when the first shipment of molasses was exported by NCS. Since then the company had exported more than one Million tons of molasses.